skip to main | skip to sidebar

Shyama Devi, arrived from India in 1968. She resided with a devotee on Halkin Street where satsang would be held. This pioneering Guru decided a place of worship was required for the   Hindu community. Her devotees and the local Hindus revered her very much and sponsored her with donations to purchase a place of worship.

They came across a Co-operative shop which was For Sale. On 14th May 1969 it was officially purchased by Mataji for about £3,400. This may not look like a significant amount today but back then it was.

On 20th July 1969 that property officially became a mandir with the instalment of the Radha-Krishna murtis.

A property can only be called a mandir once the murtis are installed; otherwise it remains a house or a shop or a function hall. 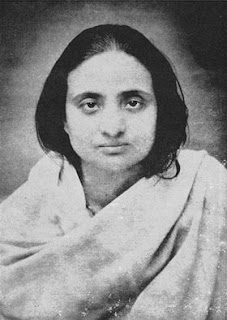 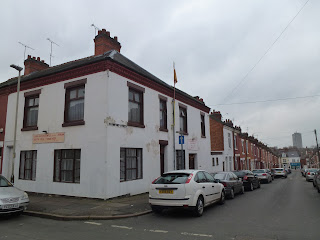 Many activities such as religious services, mother tongue Gujarati classes, celebrations of religion festivals, children's art classes etc. were started. Up to 1989, this place was very active serving the Hindu community living in surrounding areas. Slowly our people stated to move to the other areas of the city.

This is how the Leicester Mercury reported the News on 21 July 1969:-

[[[The first time that the idol Radha Krishna signifying a Hindu God and Goddess has been brought out of India was celebrated yesterday in Leicester –the new home of the £200 effigy.


Five hundred Indians of the Hindu religion walked from their temple in Cromford Street through Melbourne Road, Berners Street and Chatsworth Street with the idol.


The six foot high idol, constructed of eight metals was borne on the back of a car driven by an Indian who had flown specially from Zambia to be present.


By the side of Radha Krishna was a priestess, Shyama Mataji who accompanied Radha Krishna from India. The procession was led by singing men, who were accompanied by drums, small bells and highly-coloured sitar –a kind of Indian guitar.


Behind them came beautifully turned-out girls in their native saris, followed by the car carrying Radha Krishna. Behind this came the elder women, chanting a religious prayer.


Mr K.M. Patel general secretary of the Leicester temple—Radha Krishna Bhakti Shyama Ashram –said that the cost of bringing the idol to Leicester had been borne by one man, Mr R.L. Patel who was anxious that Leicester Hindus should see Radha Krishna. “It is an integral part of our religion” he explained, “and very important to us”.]]] 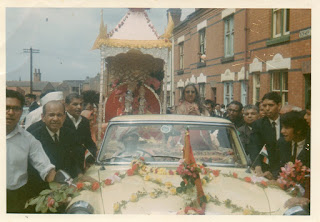 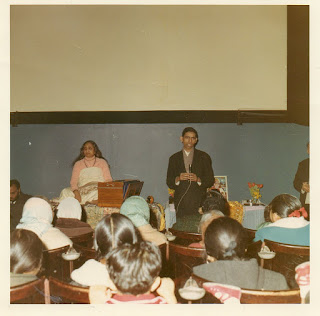 Photo on the left shows the colourful procession.

Below Mr Bhagwanbhai Parmar the priest introducing Mataji to the public.


In 1973 Hindu refugees from East Africa found Leicester an attractive place as it had a temple. Highfields was one of the areas they established themselves in.

Shayama Devi continued to operate the temple from 47 Cromford Street Leicester and in 1977 opened a second temple in a vacant shop in Balham High Street, South London.
The Radha Krishna temple is run by three women, including the daughter of Shayama Devi, who is regarded as the Mother of the temple.
Shayama Devi passed away in 1999.

Sadly there was some conflict of interest as to who owned the temple in the 70s between some of the committee members and Shyama Devi and her Devotees.

Shyama Devi’s legal team was arguing that she is the owner of the property. The committee was saying that she is the trustee and not the owner. I won’t go into the details of this embarrassing episode but after various legal arguments and court cases, it was finally resolved in 1989 when the Cromford Street property was officially handed over to Shayama Devi by the committee members.

The committee member led by Mr G R Patel later purchased another property in February 1996 at 34 St Barnabas Road for £180,000. Thus they established another Hindu temple of their own --‘Shree Hindu Temple and Community Centre.’ 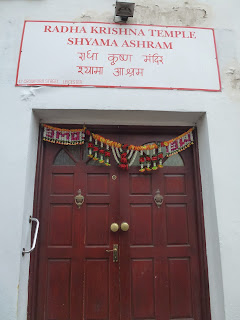 Shyama Mata is featured in a book called ‘Women of Power and Grace: Nine Astonishing, Inspiring Luminaries of Our Time’ by Timothy Conway, Ph.D.
[[In this highly-acclaimed, eye-opening book, meet nine of the greatest holy women of the modern era, from Hinduism, Christianity and Islam. Here are their deeply moving stories, filled with awesome virtues and compassionate miracles, along with 35 photos and 120 pages of wisdom-teachings on the deepest secrets of God-realization.

[[Shyama Mataji. This young wife lovingly began chanting to God for 23 hours every day, soon becoming a miracle-worker extraordinaire, a beautiful singer of the glories of the Lord, and a passionate poetess-saint of the highest order.]] 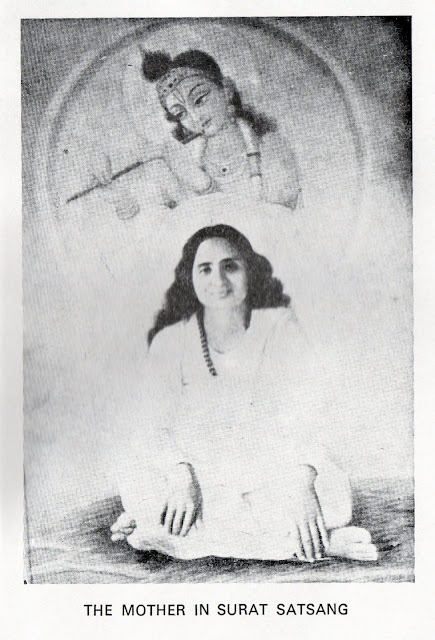 A biography of Shyama Mata has been written by Smt. Vijaya Laxmi Jalan and published in 1977.

Here are some extracts from the book:-
“Mother Shyama is noted for her abstinence, aversion to worldly pleasures, penance, her devotion for the Divine Lord Krishna, strict discipline of the Sadhan, chanting Gods name both conscious and semi-conscious state, service to saints, sterling moral character, generosity and her zeal for the propagation of Krishna name. To show mercy towards the poor and the afflicted is her special virtue. She demonstrates how in this modern world one can live in a life engrossed in the love and devotion of Krishna like Meera Bai and lead the life of strict abstinence and penance, avoiding the tempting worldly pleasures.

Her sense of detachment is unique.
At one time some disciples from Calcutta offered vast sums of money to her in donation. With the help of these funds she established a huge ashram on the banks of River Hanges in Navadiwa. In the temple are Radha-Krishna murtis. But Mata remained unattached to the ashram. Whatever she received from her disciples by way of donations, is utilised in the building and running of the ashram at Calcutta and its management is entrusted to her devotees who live there.
In the same way she established a temple at Dwarka. She has also established two ashrams in Vrindban. She travelled to Africa, Europe and America and established several centres where Kirtan is performed. There are  Radha-Krishna temples in Zambia (Africa), in Leicester (England) and in London (England) established by her.

There is a charitable Hospital established and run by Mother Shyama in Shri Radha Sant Nivas. Her life is a story of philanthropic and benevolent deeds.”

Smt Gangadevi gave birth to a daughter on 24th October 1916. The child was bluish in complexion so named her Shayma.

Some of the disciples of Mother invited her to visit Africa. 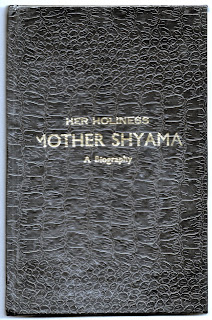 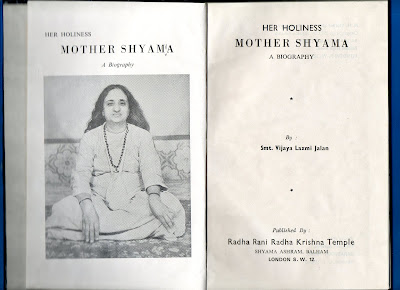 Some of the disciples of Mother invited her to visit Africa. Shri Matubhais and Shri Dalubhais families were her principal devotees in Ndola in Zambia. The Mother accepted the invitation and went to Zambai in 1964. This was the beginning of spreading the devotion of Radha-Krishna in the African Countries.
The first Radha-Krishna temple was established in Ndola. The woman disciples of the Mother formed a trust for the efficient management of the temple and the kirtan movement.
The Mother visited the neighbouring countries of Kenya, Uganda and Tanzania, and established kiratn committees in the principal cities like Nairobi, Mobasa, Kampale and Dar-es-salaam.

But this was also the period when African countries were getting independence from the British Colonial rule The Indian residents of the British African colonies were offered British citizenship when power was transferred to the Africans. Most of the Asian residents elected to take the British citizenship and transfer residence to the United Kingdom. This decade saw the Indian settlement in English cities like London, Leicester, Coventry, Birmingham, Bradford and many more. 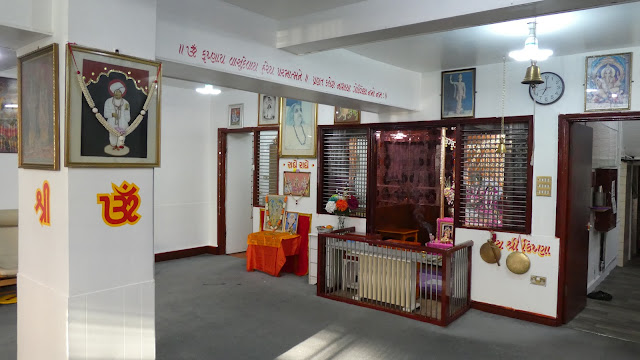 Shri Dalubhai, like many other Indians from Zambia had established his residence in Balham, one of the suburbs of south London. Dalubhai invited Mother Shyama to visit England in 1967. The Mother Shyama visited Leicester and met her Indian disciples whom she knew either in Surat India or Africa. She started Kirtan movement in Leicester. It was warmly received by the local residents. Shri Pyarelal, Shri Bhagwandas and Shri Jaikishan were prominent disciples of the mother, who requested her to make Leicester her home in England. During chanting sessions Shri Dalubai of Balham, Shri Bhagvandas and Shri Pyarelal of Leicester offered donations to the mother.

In 1969 with the sole aim of providing a place of worship for the Hindu community of Leicester, Mataji utilised the donations received in serving the community from whom they were received…………

In 1969 with the sole aim of providing a place of worship for the Hindu community of Leicester, Mataji utilised the donations received in serving the community from whom they were received. She took a momentous step in establishing the first Hindu temple in Leicester. This was known as ‘Shri Radha Krishna Shyama Bhakti Ashram Temple’. The property was purchased by the Mother from the donations received and converted it into Hindu Temple.

In 1970 the Mother prepared the constitution and got it registered with the Charity Commission.
The objects as laid down in the constitution were:-
1.       To promote the spiritual teachings of the Hindu religion and the maintenance of the doctrines on which it rests.
2.       To celebrate the main Hindu festivals.
3.       To improve the religion knowledge.
4.       To promote and organise Co-operation of the people of Leicester and the country of Leicester.

She aimed to establish better relations with the indigenous English communities. The neighbours not only were sympathetic to the aspirations of the Hindu community but encouraged them by active participation in their religious festivals.

Mother Shyama visited America and Canada in 1970 where she was warmly received. She became a messiah of the new age. She organised chanting sessions in all the principal cities she visited. She returned to London in 1973 to find the situation changed amongst the Hindu communities in Leicester. She showed immense courage and fortitude in fighting against the disruptive forces and finally making London the metropolis of the world, her principal headquarter in the west.

Being familiar with Balham that being the district where Dulubhais family lived, she purchased 33 Balham High Road premises and thoroughly converted it into a Hindu temple. Shri Vipin Desai an old devotee of the Mother from Uganda fully supported and co-operated in fulfilling this mission. He carried out the wishes of the Mother.  He also settled in Balham. In 1976 the images of Radha and Krishna were made from alloy of eight metals as it is traditional, were imported from Vrindaban and installed in the temple and it became a prominent Hindu place of worship in South London.

Radha Rani Sharma was a loyal disciple of mother Shyma. She has been with the mother for the past fifteen years. She is her spiritual child and a successor of Shyama Bhakti movement in England. She is in charge of the Radha-Krishna Temple in Balham. 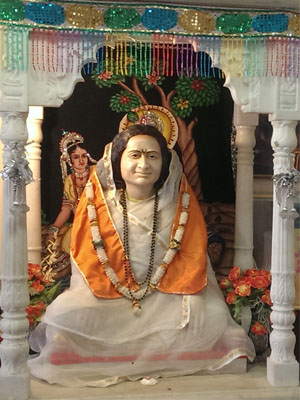 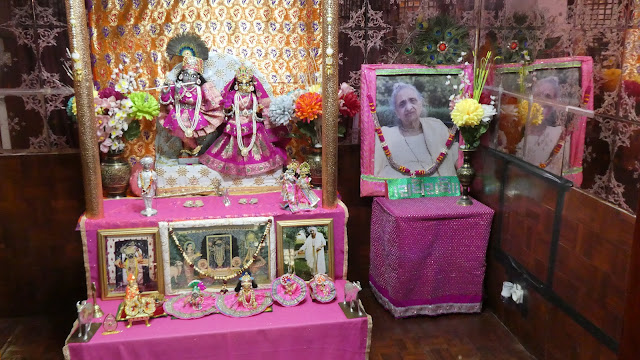